-
Jana of Cherry Tea Cakes was our July Daring Bakers’ host and she challenges us to make Fresh Frasiers inspired by recipes written by Elisabeth M. Prueitt and Chad Robertson in the beautiful cookbook Tartine.
Read More

Posted by Cupcake Kelly on Apr 27, 2011 in Chocolate, Cookies, Other Desserts | 13 comments

These are simply amazing! I was so excited when I saw this on the daring bakers for April. I have been patiently waiting for something to bake where I could candy bacon.

The April 2011 Daring Bakers’ challenge was hosted by Evelyne of the blog Cheap Ethnic Eatz. Evelyne chose to challenge everyone to make a maple mousse in an edible container. Prizes are being awarded to the most creative edible container and filling, so vote on your favorite from April 27th to May 27th at http://thedaringkitchen.com/!

2. In a small bowl mix a 1/4 cup whipping cream and gelatine in a small bowl. Leave for five minutes and then microwave for 10 seconds and stir until dissolved. Heat for another 10 seconds if needed.

3. In a large bowl whisk the egg yolks together.

4. Bring the maple syrup to a boil in a saucepan and remove from the heat. Pour a small amount of the egg yolks and whisk (so they don’t curdle). Pour in the rest of the maple syrup and the gelatine mixture. Whisk occasionally over the period of 1 hour.

6. Make the candied bacon. Preheat oven to 325 F/ 160 C. Place the bacon in a bowl and mix the pepper and brown sugar. Place the strips on a foil lined baking sheet.

I used my favorite bacon that gets crisp when cooked. In the UK I’ve only seen this at Sainsbury’s
7. Place a piece of foil on top and another baking tray on top and bake for 10 minutes. Check, sprinkle a little more brown sugar over top and bake for a further 10-15 minutes until crisp. I baked for a few minutes with the top tray taken off as well.

8. Make the cookie cups. Preheat oven to 350 F/180C and grease a muffin tray. Whisk together the flour, baking powder, salt and baking soda. Set aside.

9. Beat together the butter and sugars with an electric mixer until smooth. Add the eggs one at a time until blended. Add the vanilla and maple extracts and beat until blended and fluffy.

10. Add the flour a little at a time, mixing until combined, Stir in the bacon and chocolate chips.

11. Using a cookie scoop place 2 rounds in each muffin tray and bake for 12 minutes.

12. As soon as the cookies come out of the oven take a teaspoon and gently press the center of the cookie to the sides to make a cup.

13. Leave in the tray for 5 minutes and then remove. Let cool completely.

14. Once the mousse has set place 1 tablespoon of mousse into each cup and top with a piece of candied bacon.

Enjoy, and if you’re feeling generous share! I don’t think I want to share my candied bacon.

The March 2011 Daring Baker’s Challenge was hosted by Ria of Ria’s Collection and Jamie of Life’s a Feast. Ria and Jamie challenged The Daring Bakers to bake a yeasted Meringue Coffee Cake.

This has been my favorite challenge so far. Yeast is usually my nemesis but I did really well this time and it came out like bread should!

I filled mine with chocolate chips, cinnamon chips and walnuts.

1. Start the dough by mixing 1 1/2 cups flour, the sugar, salt and yeast.
2. In a saucepan heat the milk, water and butter until the butter is melted. With an electric mixer on low speed gradually pour in the warm milk and mix for 2 minutes. Add the eggs, 1 cup of flour and beat for 2 more minutes.

3. Using a wooden spoon stir in the remaining flour to make a dough that sticks together. Turn onto a floured surface and knead for 8-10 minutes until the dough is soft, smooth and elastic. I had to add about another cup of flour as I was kneading.

4. Place the dough in a lightly greased bowl (with vegetable oil) and cover with cling film and a tea towel for 45-60 minutes. The dough should double in size.

5. While the dough is rising make the filling by mixing the different chips and sugar in a small bowl and chopping the walnuts.
6. Make the meringue in a medium sized bowl by whipping the egg whites on medium high speed. Add in the salt and vanilla. Slowly add in the sugar until stiff peaks form.

7. Remove half of the dough and roll it out on a lightly floured surface into a rectangle.

9. Roll the dough like a jellyroll from the longer side and transfer to a non stick cookie sheet. (the directions say to make this a ring and seal it together but I made one big ring using both half’s). Repeat with the remaining dough and seal the ends with the other half and make a ring.
10. Using a sharp knife make cuts along the outside edge at one inch intervals. Cover with cling film and let rise for 45-60 minutes. Brush with the egg wash.

11. Preheat oven to 350 F/180 C and bake for 25-30 minutes until risen and golden brown. It should sound hollow when tapped. Drizzle the top with some melted chocolate.
Read More 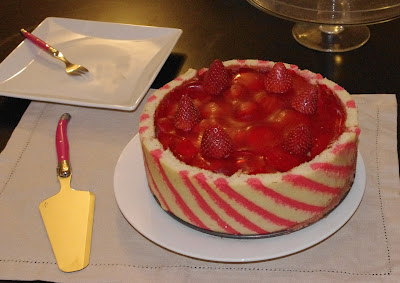 -
The January 2011 Daring Bakers’ challenge was hosted by Astheroshe of the blog accro. She chose to challenge everyone to make a Biscuit Joconde Imprime to wrap around an Entremets dessert.
-
I was really excited to take part in my first challenge until I saw that it was some poncy French cake! As I read the print out I was terribly confused. I had to research for about three days until it finally made sense to me how this cake is put together.
Read More