Posted by Cupcake Kelly on Oct 5, 2011 in Chocolate, Other Desserts | 11 comments

I was recently invited to an evening tasting Clearspring products by Helen at Fuss Free Flavours. Clearspring are a UK company that have been producing and importing organic and ethically sourced Japanese and European food products for decades. 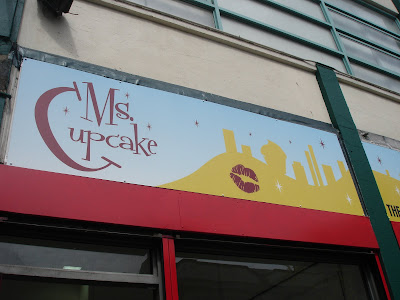 Ms. Cupcake opened April 1st in Brixton. She’s London’s first all vegan bakery. I’ve been to see her many times in Brick Lane but this was my first ever trip to Brixton! I met Ms. Cupcake at Iron Cupcake almost one year ago.
The shop is very spacious and as you can see the cupcakes are made right there! Not too many shops make their cupcakes on the premises. 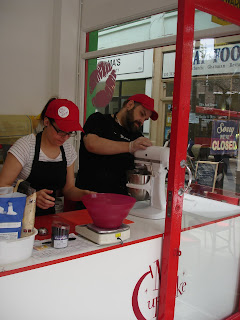 Her right hand man Jason was in the shop when I arrived. There he is hard at work making more cupcakes. Anne and I both arrived at the same time and had a coffee outside at Rosie’s. I love getting together with my blogging friends for a little cake gossip! My husband and co-workers can only take some much cake talk. 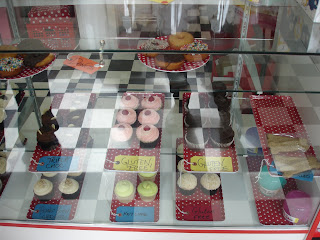 The shop has huge windows all at the front and it was incredibly bright hence all the glare on the cupcake cases. I bought a key lime cupcake to take home with me. The frosting was great and had a really nice lime flavor. 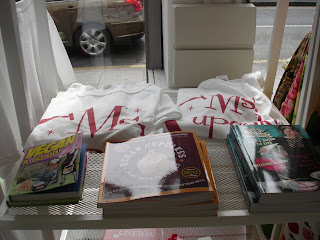 They also have a few vegan books and cupcake paraphernalia for sale. 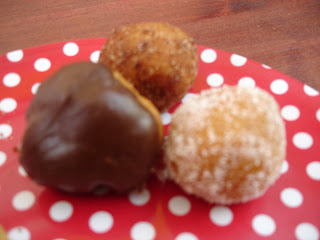 Anne and I were both tempted down to the bakery by these babies. Vegan donuts! I have never had a vegan donut before and they taste no different than a regular donut. If there is a baked good that London is missing it’s donuts. I have made a few of my own donuts. 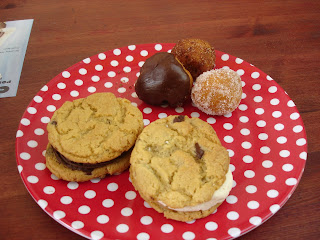 Jason prepared us a whole plate of goodies to try! I enjoyed the Boston Cream donut the most but the custard was a bit absorbed into the donut. I think that the cookie sandwiches are my new favorite. I really liked the vanilla one and I could eat 10 of them!
I’ll definitely be back!

My husband wanted chocolate cupcakes for Valentine’s Day. I really wanted an excuse to use these cute Wilton flower cupcake holders. Win-Win situation!

I got the chocolate heart shaped sprinkles at Lola’s in Mayfair.

This is only my second time making vegan cupcakes so I’m still getting the hang of it. I think the Vegan Cupcakes Take Over the World book is a good place to get started in that kind of baking.

The cake was nice and moist and a little spongy. I made a “cooked” chocolate frosting to go on top.

2. Whisk together the soy milk and the apple cider vinegar in a large bowl and set aside for a few minutes. Add the sugar, oil, vanilla and almond extract to the soy milk and beat for 2 minutes.

3. In a separate bowl sift together the flour, cocoa powder, baking powder, baking soda, and salt. Add the flour mixture in two batches to soy milk mixture and beat until the ingredients are combined.

2. Melt the dark chocolate and set aside to cool. Beat the margarine and vegetable shortening in a large bowl until fluffy. Beat in the icing sugar and cocoa powder. Beat in the cooled chocolate, soy milk mixture and vanilla until smooth and fluffy. Pipe on cooled cupcakes right away.
Read More

-
My husband asked me to have a hand at baking a diary free cake for him. I don’t really like baking without butter but I can’t say no to him. So I got a vegan cupcake book. It came highly recommended on Amazon.
-
Read More