I attended Cupcake Camp Bournemouth recently. The event successfully raised over £1,800 pounds for Macmillan Cancer Support. I took a lot of photos on the day, click here to see them all. A lot of hard work into organizing the event.

I donated Chocolate Pretzel Man Cakes. There aren’t any cupcake shops in Bournemouth (as far as I know) but there are plenty of home businesses in the area. Nearly all of the cakes donated were from professional bakers. I really wanted to take a picture of each kind donated but it was too busy and the cupcakes dissapeared really quickly!

Here are some of my favorites from the day (if anyone knows who made these let me know and I’ll update each photo).

This was the best tasting cupcake of the day I think! It was a nut and spice combination.

On the whole I left the event feeling a little disappointed. When I left the last cupcake camp I attended, I left on such a high (not just a sugar high). This event had a different vibe.
I felt it was over before it even started. The event was advertised to start at 2pm and run until 5pm. When I arrived at 1:40pm to set up my stand people were already taking cupcakes. I wasn’t pleased when people kept trying to take them before I’d finished getting my display ready! The judging competition was also finished before the start and by 3pm all the cupcakes were gone and it was over. The good news is that people seemed to enjoy themselves and there were lots of kids having fun.
As a baker, in my opinion, I was disappointed that the businesses gave themselves a big profile and I thought the charity seemed to take second place. The event was organized with good intentions however.
I am excited for the next cupcake camp and I’m already thinking about some mind blowing creations!
Read More

I made these for Cupcake Camp Bournemouth this weekend. The event was really successful and all the cakes were sold to benefit Macmillan Cancer Support. I was inspired to make these by some photos I’d seen recently around of man cakes. They’re very simple looking but taste amazing!

These “man cakes” went down pretty well I think! I was only able to make 24 since we were coming from London but they were all sold in about 30 minutes!
-

The frosting tastes like caramel but there’s not actually caramel in it. The brown sugar is a little grainy so it’s best to make it the day before and let it mature for one day.

2. In a large bowl on medium speed cream the butter until smooth. Add the sugars and beat on high until fluffy. Add the eggs one at a time, beating well after each addition.

3. Add the flour mixture in three parts, alternating with the buttermilk, beating after each addition. Add in the vanilla and beat until all the ingredients are combined. Don’t over beat.

4. Fill each cup three quarters full and bake for 25-30 minutes. Place on a cooling rack.

1. In a large bowl cream the butter on medium high speed with an electric mixer until smooth. Add the brown sugar and combine. Add in the icing sugar half a cup at a time on low speed.
2. Add the milk, syrup and vanilla. Beat until smooth and creamy about 3 minutes. I sprinkled some Fleur de sal on top after I frosted them. Store in an airtight container until ready to use.

2. Dip each pretzel in chocolate and sprinkle with the Fleur de sel and place on a cooling rack till the chocolate is dry.

1. Stir the caramel into a medium sized bowl and stir in some Fleur de sel 1/2 tsp at a time to taste.
2. Cut a cone shape out of each cupcake once it’s cool and cut off the cone bit. Spoon in about one tablespoon of caramel and place the top of the cake on top.
3. Frost and top with a chocolate covered pretzel. Enjoy!
Read More 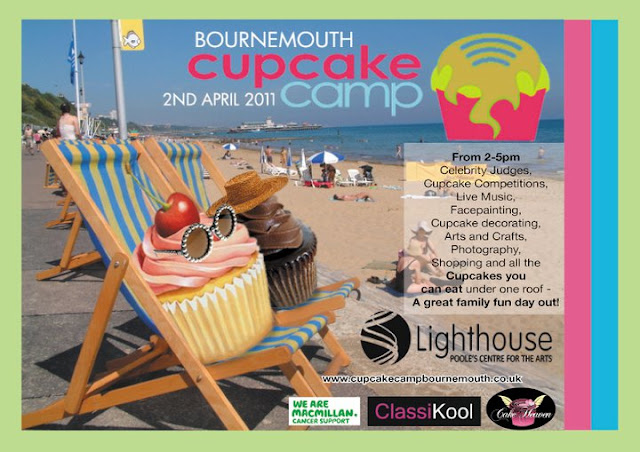 Image made by Ellie
Cupcake Camp is coming to Bournemouth on April 2nd! I can’t wait. I had such a blast at Cupcake Camp London. Money is being raised for Macmillan Cancer Support. Each cupcake donated by us bakers will be sold for £1 which will be donated to charity.
This time I’m only bringing 24 cupcakes instead of the 100 I brought last time so I hope to be able to enjoy the whole day without being at a table with my cupcakes the whole time.
It takes place from 2-5pm at The Lighthouse near Poole station. Full event and RSVP details on their facebook page.
I haven’t decided what I’m making yet but I hope to see lots of people there!
Read More 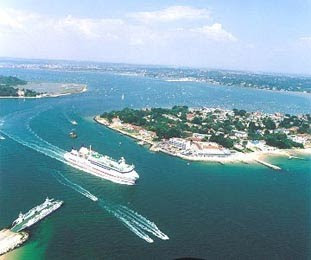 -
I went to Poole and Bournemouth this weekend to visit the in laws so I didn’t have time to bake anything so I found a few fun things while I was down there to write about instead.
-
It was a beautiful weekend. I guess it’s also this strange weather that’s keeping the volcano ash cloud over Europe. As usual when we got there we took a walk to Poole Quay (the second largest natural harbour in the world after Sydney) and on the way is the Dolphin Mall. The mall itself is not exciting at all. It’s an ugly 1970′s block of concrete.
Read More