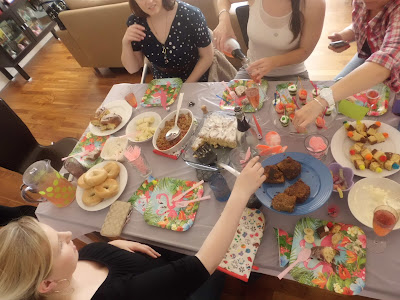 -
I recently had a Dessert Brunch party at my house and invited some friends over. Most of the dishes were sweet or desert themed breakfast items.
-
I already posted all the recipes. Here’s a summary of what I served should anyone be interested in hosting a similar party.
-
Read More

I made these to serve at my brunch and any fun party isn’t complete without a few shooters! I filled mine with cake rather than the tequila and vodka from my college days though.

The idea is simple. Instead of being filled with liquid or only jell-o the disposable shot glass is filled with cake spiked with alcohol, a spiked jell-o layer, another cake layer and then finally topped with a swirl of buttercream and topped with a candy of your choice. 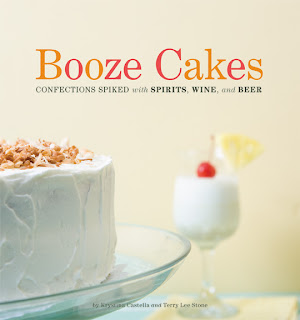 I took the idea from Booze Cakes a book filled with cake and booze (obvious)! Quirk books were kind enough to send me a copy. I hope to find the time to make something from the book for 4th of July!

I picked up the plastic shot glasses at The Dollar Tree while I was in Arizona. I made a non alcoholic version (for those that were preggers) using the frozen layer I saved from my Peggy Porschen cake and a tube of white decorating icing that Dr. Oetker sent me a few weeks back.

The cake recipe makes two 8 inch cake rounds. I only had 8 guests so I made about 20 shots which only used half of one cake. I froze the rest to use for cake pops at a later date so it doesn’t go to waste. The recipe could easily be halved.

Finish
Gummy bears or worms
Buttercream, homemade or store bought (I used a tube of read and white wilton swirl for the spiked shooters)


1. Make the cake. Preheat the oven to 350 F and grease two 8 inch cake rounds. In a large bowl, cream together the butter and sugar for 5 minutes until light and fluffy. Beat in the egg yolks and slowly pour in the milk. Stir in the vanilla and liquor.

2. Fold in the flour, salt and baking powder. In a small separate bowl whip the egg whites until stiff. Fold the whites into the batter.

3. Fill each round and bake for 25-30 minutes until golden brown. Set aside to cool completely.

4. Make the jell-o. Bring the water to a boil in a small saucepan. Stir in the gelatine until dissolved. Set aside to cool to room temperature. Stir in the alcohol and then pour into a dish and refrigerate until completely set.

Enjoy! I wonder how many it takes to get buzzed?

Make sure to check out the Cupcake Cocktail I served and check back later this week for the rest of the goodies I made for the party. 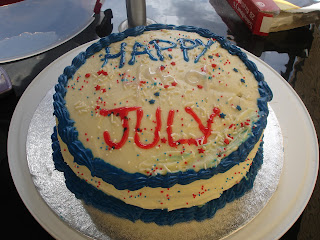 -
I love layer cakes. Every time someone has a party I make one. They’re too big for me to make all the time. Between the two of us we’d never be able to eat it. A holiday themed cake is even better! I have the best mom she sent me 4th of July sprinkles and whatever else they had at wal-mart. We celebrated one day early.
-
Read More 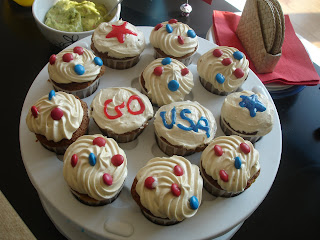 -
I had a last minute small world cup party at my house to watch the USA v Ghana game (let’s forget they lost). I made Peanut Butter Cupcakes with Peanut Butter Swiss Meringue Buttercream, onion rings and pink lemonade. These were American things I could think of at the last minute to make. I almost made my own salsa and guacamole but decided to buy from Waitrose at the end. We did have Pimms which is English not American but it’s my favorite summer drink.
-
Read More