I whipped these up at about eleven o’clock at night after a batch of florentines went wrong! I wanted to bring some cookies with me when I went to see a friends new baby. I used the oatmeal cookie recipe from The Cookiepedia.

I had some leftover ham from the Christmas period that I stuck in the freezer. Last year I made soup with the leftovers and well that’s pretty boring! This time I decided to spice things up and make indulgent Monte Cristo sandwiches. If you’re still going strong on your New Years Resolutions look away now. If you want to break them, keep reading!

A Monte Cristo Sandwich is the American version of the French Croque Monsieur. It uses french toast bread with ham, turkey and Swiss cheese. Served with powdered sugar and raspberry jam. Different geographical areas will have their own variations. 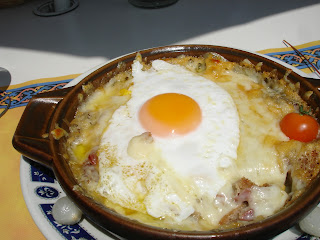 Croque Monsieur I had in Switzerland in 2009

You can fill it with any kind of meat or cheese that you like. I’ve used ham and a dairy free Swiss cheese. I decided to fry mine because all that meat and cheese already isn’t healthy so why not go all the way! These are incredibly rich and one sandwich is more than enough per person. 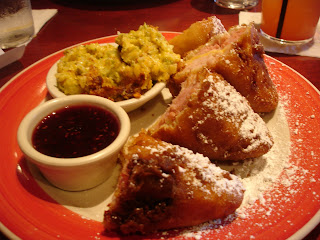 Monte Cristo I had in Tennessee this summer. I really wish I’d taken a picture of the one I had in Disneyland a few years ago.
-

2. Cut each sandwich diagonally and wrap tightly in cling film and refrigerate for 30 minutes minimum (I left mine overnight). This will help seal the sandwich so it won’t absorb the egg mixture when you’re ready to fry.

3. Make the egg mixture by mixing the 3 eggs and milk in a medium bowl. Heat about a third of a bottle of canola or rapeseed oil into a large deep pan on medium heat. If you have a thermometer heat until it reaches deep fry.

4. Drench each sandwich half in the egg batter and carefully lower each into the oil with a spatula and fry for 2 minutes. Using your spatula turn over and fry for 2 more minues. Carefully remove from the pan using the spatula to a paper towel lined plate (do a test sandwich half first to test the oil).

4. Dust each sandwich with icing sugar and serve with a blob of raspberry jam.
Read More

Sarah over at Maison Cupcake has started a blogging challenge, “Forever Nigella”. Each month there will be a new theme and anyone participating chooses a Nigella recipe from any of her books or her website. The first challenge is “Seasonal Sensations”. Recipes that would suit either Christmas or New Year.

I didn’t own a single Nigella book. I’m more of a Martha Stewart girl. I think Nigella is the Martha for British people? I did see she had one recipe in the December Food Network magazine. Luckily Sarah recommended which book I should go for.

I bought Sarah’s recommendation How to be a Domestic Goddess. I figured I would use it again anyway in other upcoming challenges. Ten quid on amazon isn’t bad at all and there are lots of recipes in there. I would say that getting the book is probably worth it. The recipes on the website weren’t very inspiring in my opinion.

I’m a terrible photographer so I don’t think these pictures capture how delicious these bagels are. The bagels in the UK are not really bagels. Bagels are supposed to be slightly chewy and the bread should be “tight” not crumbly. Every time we go to the US my husband makes us go to Panera everyday for breakfast so by the time we get back I don’t want another bagel for a whole year.

Tips
1. Check the pack of the yeast your using. Quick action yeast can be added to the flour. Other yeast will need to go in the water mixture and activate for a few minutes before use.
2. When poaching the bagels they will at first sink to the bottom. They’re ready to be taken out when it rises to the top. I didn’t bother flipping mine either.
3. Use a spatula to take the bagel in and out of the boiling water. I used tongs at first but this caused the joint that made the ring to break.
4. Only a machine will make perfectly formed bagels.

I chose to make bagels because baking with yeast is way outside of my comfort zone. I almost threw this batch in the bin too! I thought they had ended up all doughy in the middle but after they cooled I cut one in half and they looked like a bagel in the middle! I was pretty impressed with myself. The only other yeasted thing I have made successfully before are donuts.
These bagels are divine. The slight tartness of the cranberries and the sweetness of the orange zest taste amazing with the slight saltiness of the butter on top. They taste better toasted and the butter gets all nice and melted. These scream Christmas and should absolutely be used to make a turkey sandwich!
Read More

Posted by Cupcake Kelly on Dec 27, 2010 in Fruit, Holidays, Other Desserts | 4 comments

I made these for breakfast on Boxing Day. The apple cinnamon compote in the middle takes a little time but it is so worth it. Almost better than eating apple pie!

If you don’t have an Ebelskiver pan don’t worry. The filling for these would taste great on any kind of pancake or waffle. You could use it to jazz up some Ego’s too! We ran out of maple syrup so I had mine with vanilla ice cream!

Ebelskivers are Danish pancakes that were traditionally filled with jam and served at holidays or celebrations. The ones of today are versatile and filled with sweet or savory items.
Vanilla Pancake Batter
from Ebelskivers by Kevin Craft
Ingredients
1 cup plain flour
1 1/2 tsp sugar
1/2 tsp baking powder
1/4 tsp salt
2 eggs separated
1 cup milk
2 tbs melted butter
1/2 tsp vanilla
1. In a large bowl whisk together the flour, sugar, baking powder, and salt. Then stir in the egg yolks, milk, melted butter and vanilla with a wooden spoon. The batter will be lumpy.
2. In a small bowl whisk the egg whites until stiff. Fold in one third to lighten the batter and then fold in the rest.

2. Add the apples and cook, stirring often, until the apples are tender about 10 minutes. Remove from the heat and set aside.

3. Place the ebelskiver pan over medium heat. Brush each well with a little melted butter and place a tablespoon of batter in each.

4. Place a tablespoon of the filling in each well.

5. Place a tablespoon of batter on top of the filling.

6. After about 2 minutes using two wooden skewers flip the pancake over so the other side can cook. It will be a little liquid still but will fuse together when flipped.
7. Place in a warm oven until ready to serve. Dust with icing sugar.
Read More

I made some vanilla frosting and then split it evenly between two bowls and made one half red and added some peppermint extract. I added vanilla extract to the other half.
Brownie Cupcakes
adapted from Martha Stewart makes 15
Ingredients
1 1/2 cups plain flour
3/4 tsp baking powder
3/4 tsp salt
1/2 cup (1 stick) unsalted butter at room temperature
6 ounces dark chocolate
1 1/2 cups sugar
3 eggs
1/2 tbs vanilla
1. Pre-heat oven to 350 F/180 C. Line muffin tin with paper liners. In a small mixing bowl, whisk together the flour, baking powder and salt.
2. Heat butter and chocolate in a double boiler, stirring occasionally, until melted. Remove from heat, add sugar and whisk until smooth.

3. Add eggs, one at a time, beating until each is incorporated. Add the vanilla, and beat for 3 minutes. Reduce speed to low and add the two thirds of the flour and mix until incorporated. Fold in the last third by hand.

1. Cream the butter and criso together until smooth and fluffy. Add the icing sugar 1/2 cup at a time beating on medium high speed.

2. Place half the frosting in another bowl and mix in the red food coloring and the peppermint extract. Mix the vanilla extract into the other bowl.

3. In your piping bag scoop the vanilla part in once side and the red part on the other side and when piped should create a nice two toned swirl. Sprinkle pop rocks on for decoration.
Read More
Page 1 of 3123»