There is only one word for these brownies. Awesome. I had my first red velvet cheesecake brownie a few weeks ago from Kooky Bakes. There’s no way I could replicate Scott’s genius but these are still pretty good!

This is my first epic layer cake. I’ve made layer cakes before but this is the first one that came out not lopsided and really sleek looking. It’s made of  four six inch layers instead of the traditional eight inches. It’s super cute since it’s nearly a mini layer cake!

I was lucky last week to be invited to a Food Network party to celebrate the 20th anniversary of National Doughnut Week. I was really excited because I love doughnuts! I also made Banana Bread Donuts to celebrate at home!

To celebrate Food Network are having a month of doughnuts. There is a doughnut calendar with a different doughnut every day for the month of May.

MD for the channel Nick giving a speech. Food Network UK is the fourth fastest growing channel on Sky! Pretty impressive since they’ve only been on the air about a year.

Here’s me trying to eat a doughnut without licking my lips! I managed to do it but it’s not easy! I did end up with jam all over my dress (it came out though)!

Ainsley Harriott was there. I used to watch Ready, Steady Cook all the time when I was a student.

Jun Tanaka, frequently on TV in the UK and Executive Chef at The Pearl. I also spotted Eric Lanlard, Ed Baines and Reza Mohammed.

I managed about three donuts and three cocktails before I was over come with all the sugar!
I had a really great time and everyone was super nice! I also met Abby from The Exquisite Cake Company. She made the doughnuts from the first day on the doughnut calendar.
Here is a video from Food Network UK you tube channel with me trying the doughnut challenge! Eating a doughnut without licking my lips. I’m very briefly here at 8 seconds (making a stupid face) and at 17 seconds.
Read More

Channel 4 Food (Channel 4 is a terrestrial TV channel in the UK) issued their pick of the Best Baking Blogs and I’m blown away that I was included on the list as “For the Adventurous”! 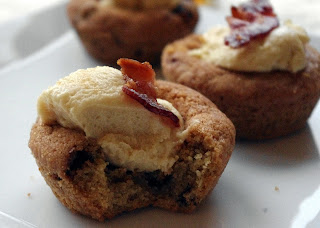 This is what Channel 4 had to say about An American Cupcake in London:

“Tempted by chocolate gravy? Or how about a maple, chocolate chip and candied bacon cookie cup? No? Surely a twisted Creme Egg cupcake will tickle your taste buds then? Kelly, the self-taught cook behind An American Cupcake in London is certainly one of the most experimental and adventurous home bakers on the web. Her fusion of traditional British puds with an American sweet tooth makes for a rich combination. Stop by for original recipes, a cupcake suppliers list and a rather wonderful London Cupcake Tourist Map”.

Make sure to check out all the other great blogs on the list!

Thanks to Channel 4 for including me! 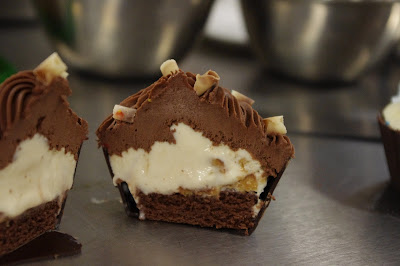 -
Last night as part of the Gelto workshop (click here for those details) at Gelato Mio we advised Carlo on his new Gelato Cupcakes! It was pretty much the reason I was invited. Carlo knows everything about ice cream so now he wants to know everything about cupcakes.
-

When I got his email asking me for my opinions on a gelato cupcake I thought I’d died at gone to heaven. If you read my blog frequently enough I’ve mentioned several times that my three great loves are ice cream, cupcakes and tea. Combining two of them together is just genius.
-

I say “we” as I wasn’t the only food blogger there that night. He invited several and Andrea was there with me at this session. We were the first to get a glimpse which is very exciting!
-