-
These are great snacks for Thanksgiving! The genius of Reese’s Peanut Butter Cup but with the filling that tastes like Pumpkin Pie!
-

-
I had leftover pumpkin from when I made pumpkin cupcakes (which I encourage everyone to try, some of the best I’ve ever made). What better way to use it up than to make pumpkin donuts! There aren’t many donuts on offer in England. Krispy Kreme’s and the grocery store made donuts and that’s about it. I hope gourmet donuts take off here soon.
-Also unfair that a full range of fall flavors is available at Dunkin Donuts. Even Pumpkin lattes! I’ve made my own before but it’s just not the same.
Read More

Posted by Cupcake Kelly on Sep 22, 2010 in Chocolate, Holidays, Other Desserts | 4 comments 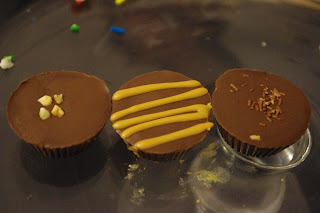 -
I’ve been dying to make these since I came back from the US. I bought a bunch of candy and chocolate molds at Hobby Lobby. There are a lot of things you can put in a cup mold but I had to do peanut butter first! I used dark chocolate and made a salty peanut butter filling so it wasn’t too much an imitation Reese’s.
-
Read More