I went to visit my sister in Manchester, New Hampshire which was the beginning of a two-week cupcake adventure! Manchester has its own brand new cupcakery, Queen City Cupcakes.

I was lucky to be invited to a Kenwood Masterclass last week at the amazing L’atelier Des Chefs Cookery school in London lead by Kenwood development chef Martin Johns. To see all the photos I took on the evening click here.

Just a quick note to let you know that I’ve moved my site from Blogger to WordPress. I hope you like the new look of the site! Most of you should automatically be re-directed to the new site. If necessary update any RSS Readers with the feed for the new address so you don’t miss any posts. Anyone following through GFC is automatically brought across.

Today I went to the unveiling of the Truvia Voyage of Discovery on the rooftop of one of London’s most famous department stores, Selfridges.
- 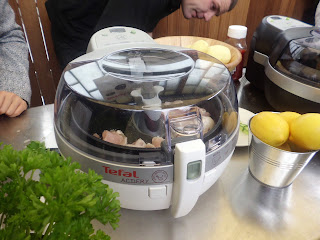 -
I knew that it was a mistake to go to the Tefal press day last week. Now all I can think about are gadgets that I want and can’t afford! I don’t typically go to these events since I usually have to be at work but it wasn’t too far from my office and I like the Tefal brand. I own several of their pans. I’m personally a big fan of non stick cookware.
-

I have a serious weakness for kitchen gadgets and these were my favorites from the day. Tefal, Nespresso and Rowenta are all owned by the same parent company.
-

The picture up top is the Tefal Actifry. Instead of a deep fat frying you use one teaspoon of oil to make chips, sausages, chicken nuggets or whatever you fancy (Mimi reviewed it here).
- 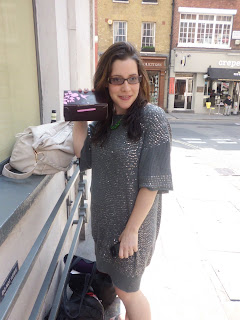 Rachel from Cupcakes Take The Cake was in London this weekend! How exciting is that? I promised to take her to taste some London cupcakes and we saw a few sights along the way!

We met up and hit Central London and Soho on Saturday. First stop was Cabbages & Frocks Market where we had a sampling of gluten free cupcakes and donuts from Sweet Cheeks. 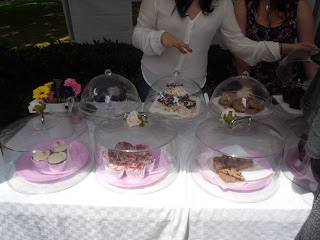 The lemon and raspberry cupcake was amazing. I never would have guessed it was gluten free (I had my own foray into gluten free baking this weekend. More on that in a few days). I was also surprised with the donut. It was lovely! The sample of peanut butter blondie we had was also excellent. I would definitely recommend them if you have a wheat or gluten intolerance. 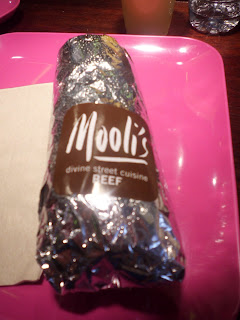 Next stop was Moolis. I needed something to counteract all the sweetness. I had the The Kerelan Coconut Beef (as recommended by Anne) and it was delicious! It’s not a burrito but for nearly the same price it is just as good or even better than the burrito places that have popped up all over London. 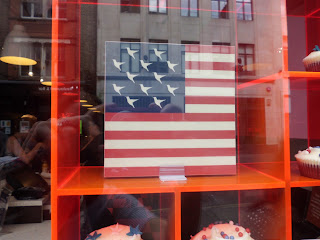 We hit up Hummingbird bakery next. We got a chocolate, vanilla Fourth of July and Mango special. The mango special was better than I expected but the frosting was way to sweet. The vanilla was my favorite of the day. Really soft and tasted of vanilla. The design was almost too cute to eat. I liked the chocolate one too. My favorite combo at Hummingbird is the vanilla cake with chocolate frosting. 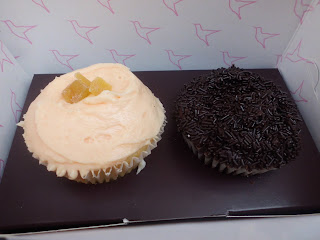 Rachel also got a Rocky Road. It was really hard and almost impossible to eat. Hilarious trying to watch her break a piece off! 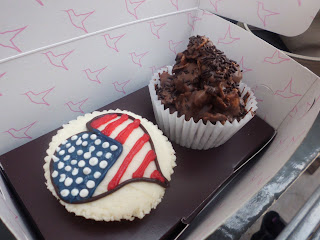 We made a stop at Johnny Cupcakes next. I try not to go in there too often because I always walk out with a new shirt…This time it was the new watermelon one! Way too cute to resist!

Last stop of the day was Cox, Cookies & Cake. I had absolutely no more room for cupcakes at this point! Rachel had a chocolate cupcake and they gave her a free hot chocolate shot. I didn’t try the cupcake but the hot chocolate shot was very nice. Her cupcake was only £2.50, the more decorated ones are a hefty £4.00.

It was super fun to meet Rachel and I had a great time doing a cupcake tour! She took a lot more pictures than me so make sure to check out Cupcakes Take The Cake over the next few days.