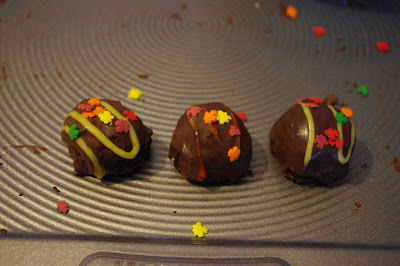 -
I made cake truffles today. I wasn’t going to put them on the blog (so I didn’t really take any pictures) but Alex insisted. The easiest thing to make and assemble and it’s his favorite. It’s also a great way to show off sprinkles. It’s September now so I used my autumn leaf sprinkles and orange and yellow sparkle gels.
-
Read More 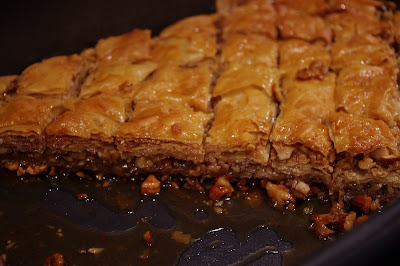 -
I made baklava for the first time today. This is the fist time I’ve baked with filo pastry and I think my first attempt was admirable. I learned a lot and know what to do for round 2 to make a superb batch! I’ve adjusted the recipe below so should you decide to make it your first batch should turn out excellent!
-

-
Paperchase has loads of cupcake paraphernalia. The store on Cheapside is pretty big and it basically has a small area with just cupcake things on it! it’s lethal having to walk by it twice everyday going to and from work!
-

-
Cupcake Camp London has arrived and American Cupcake in London is a sponsor! I’ll be sharing a table with Made with Pink!
Cupcake Camp will take place on October 31st from 2-5 at Proud London in Camden. Cupcake Camp is a charity event that will benefit the North London Hospice.
Andrea and I will each be making a ton of cupcakes but many others will be donating a dozen here and there. No doubt there will be enough cupcakes to go around!
Fancy your chances and enter the baking competition in a variety of different categories. Judged by Lisa and Martha from the Primrose Bakery.
-
Read More 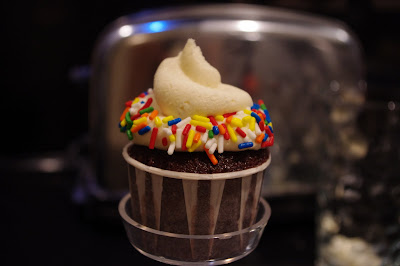 -
I wanted to make something really fun for national cupcake week but also quick since it’s a weeknight! I decided to try out the “Perfectly Chocolate” Hershey’s cupcake recipe. It’s essentially a one bowl recipe and I was curious to see if it compared to the Martha chocolate one I’m fond of.
- 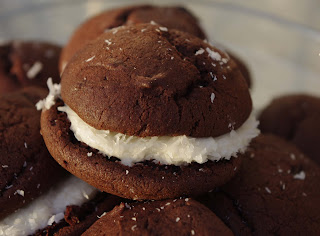 -
I decided it was time to make more whoopie pies! They can be whipped up pretty quickly so they were great for a Saturday afternoon. I made the same chocolate sandwich as before and made the coconut filling from the whoopie pies book.
-
Read More

Posted by Cupcake Kelly on Sep 5, 2010 in Chocolate, Other Desserts | 4 comments

-
Ebelskivers are Danish pancakes. Peanut butter isn’t a traditional flavor but I got an Ebelskiver cookbook at William Sonoma (also the place to get an Ebelskiver pan) and it inspired me to make my own flavor combination. Ebelskivers are fun because so many flavors can be mixed and matched and they’re as easy to make as regular pancakes!
-
Read More
Page 30 of 42« First«...1020...2829303132...40...»Last »