I’m finally back from vacation! I have so so many cupcake pictures to share. I’m actually afraid to count how many bakeries I visited in the span of two weeks! As usual I bought tons of American baking goodies to take back with me to London so watch out for some fun stuff in the next few weeks.

I’m kicking off National CupcakeWeek a little early. I made these to take to work and take donations for charity in return. They went over pretty well and all 18 I brought in were gone before lunch!
-

Everyone on the planet has already made Harry Potter cupcakes in the few weeks before the last movie opened. I had these “butterbeer” cupcakes bookmarked when part one of the last movie was released but only got around to making them now!

-
If you read my blog often enough you’ll know I like to experiment with different flavor combinations. It’s very rare for me to make plain vanilla or chocolate cake. These cupcakes don’t have any butter but they’re lovely and spring like.
-
Read More

I had to make one more batch of Easter cupcakes because I’ve been visited by the appliance fairy! The appliance fairy works at Appliances Online for her day job, but grants wishes in her spare time! She brought Helen from Fuss Free Flavours a mixer. I commented on her blog post and the fairy brought me Mini Cupcakes by Leslie Fiet.

If you would like a wish granted from the appliance fairy leave a comment below making a wish! One of them may be granted! Visit their website for some inspiration.

The frosting on these cupcakes are a little dark for Easter but I really wanted to do something with a Cadbury egg this year and I’ve already seen a lot of cupcakes with yellow frosting so I styled mine as a Twisted candy bar. 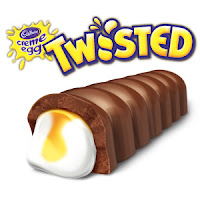 I made a vanilla cupcake and topped it with vanilla frosting mixed with the centers of cream eggs and twisted with some chocolate frosting.

1. Line a muffin tray or mini muffin tray with paper liners and preheat the oven to 350 F/180 C. In a large bowl beat the wet ingredients together with an electric mixer on low speed.

1. Cut the cream eggs in half and scoop out the centers into a medium sized bow. Save the chocolate shells to eat later. Mix the centers with 1 cup of vanilla frosting. Add yellow food coloring if desired.

2. In a piping bag with a star tip place the yellow frosting in and push it to one side. Place the chocolate frosting on the other side. When your piping and squeeze the bag the two colors will swirl.

As it’s been so hot I put my cupcakes in the fridge so the frosting doesn’t melt. The cupcake recipe I used is very fluffy and not overly sweet due to the tart fruit puree. The super sweet frosting balances it out a little.

April 29th is almost upon us and with it comes a barrage of TV and magazine specials, tea towel souvenirs and of course cake! Lots and lots of cake. In case you missed it check out my guest post on Cupcakes Take The Cake on Royal Wedding Cupcakes in the UK. I’ve never had so much fun doing research before!

At the real wedding there will be a fruit cake made by Fiona Cairns and a McVities biscuit cake. I reviewed Fiona’s book Bake & Decorate earlier. Read it here and see the three recipes I tested. April 29th has been declared a bank holiday so I have the day off from work. I haven’t decided how I’m going to celebrate yet!

-
I’m not a huge fan of fruit cake so I made a peach champagne cupcake complete with juicy peach chunks and topped with a luscious champagne swiss meringue buttercream. The cases are made by Meri Meri.
-

2. With an electric mixer on high speed mix cream the butter and sugar together until light and fluffy. Add the eggs one at a time beating until combined. Add in the vanilla and peach flavoring (if using).

3. Add the flour mixture in two batches alternating with the champagne until all incorporated. Fold in the chopped peaches.

4. Fill each cup three quarters full and bake for 25 minutes. Transfer to wire racks to cool.

5. Make the frosting by whisking the egg whites and sugar over a double boiler until warm and the sugar has dissolved.

6. Pour the mixture into a large bowl and beat on medium high speed until smooth and fluffy, about 10 minutes. When the bottom of the bowl is no longer warm start adding the butter one cube at a time. Continue beating until all the butter is added and add the vanilla and the champagne one tablespoon at a time. Don’t add too much or the frosting will go runny.