I’ve been reading lots round ups of the year and I think it’s a great idea. I have only just set up my Google Reader in the last few months. Previously I had everything book marked so I wasn’t able to read as many blogs as I do now.

I did a half year round up here of all the things I was proud of and what I wanted to accomplish. In this round up I’ve posted my Top 10 favorite cupcakes (in no particular order). No easy task considering I’ve made 155 posts so far this year and 57 of them were related in some way to cupcakes. 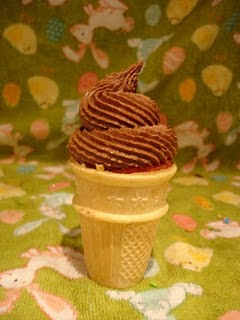 1. In March this Strawberry and Dark Chocolate Ice Cream Cone Cupcake was my first cupcake posting. I love the way it looks when sliced down the middle. I threw some bright colored sprinkles into the batter to get the spotted effect in the cake. 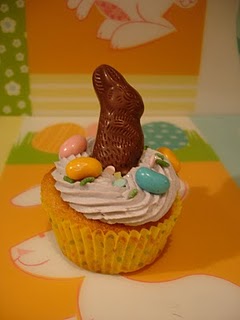 2. The Lemon and Vanilla Easter Cupcakes were a big hit at the office. I love the lavender color of the frosting. 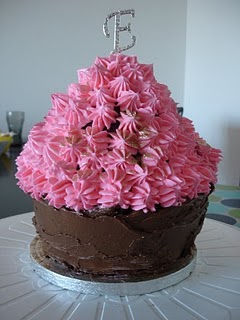 3. In May I made the Princess Cupcake Cake for a friends daughter. It was a big hit and was also my first mention on Cupcakes Take the Cake. 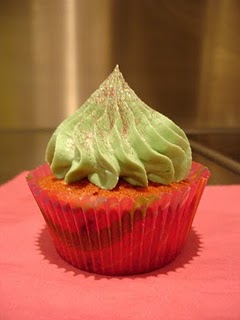 4. Also in May I made my now famous Watermelon Cupcakes. They got me my first Iron Cupcake London win. 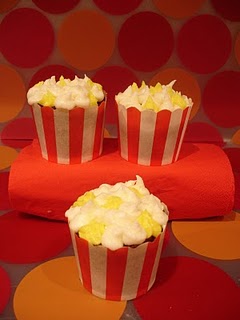 5. The Popcorn Cupcakes that were for the last Iron Cupcake London are one of the most popular on my blog. The red and white striped cases along with the white and yellow frosting made these extra cute. They were number 16 on Party Cupcake Ideas 50 Summer Cupcake Ideas. 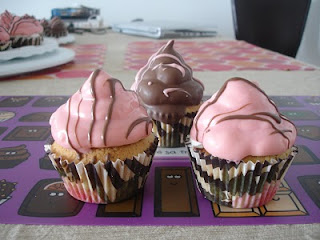 6. The Designer Hi Hats are one of my favorites and one of my most creative. Also mentioned on Cupcakes Take the Cake. 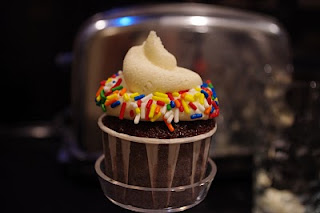 7. Sometimes simple is the best. I love the way these Chocolate Rainbow Cupcakes look. These are probably the easiest cupcakes to make. A little bit of trickery with the sprinkles really sets them apart. 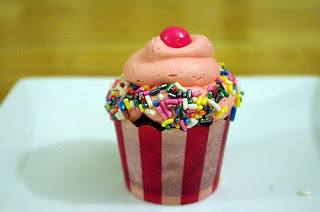 8. The Bubblegum Cupcakes were the favorite of the day at Cupcake Camp. Not everyday that an A List Hollywood celebrity tells you your cupcakes are cute! 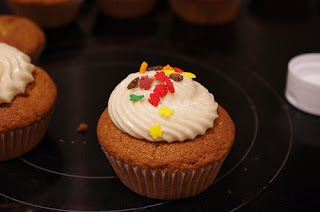 9. The Pumpkin Cupcakes I made for fall were some of the best tasting I’ve ever made. 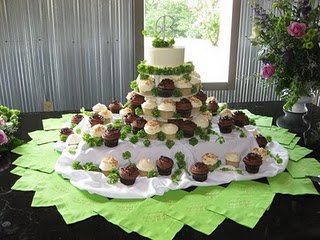 10. The best for last is my Wedding Cupcake Tower. 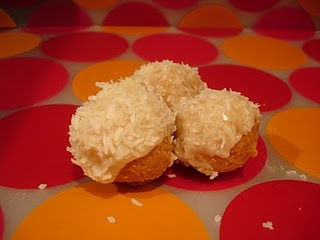 Other desserts I made that deserve a special mention are the Rainbow Marshmallows, Honey Macarons and Coconut Cake Donuts.

Happy New Year everyone! Thanks so much for reading my blog and leaving comments. I appreciate it and I read all of them. I can’t wait to see what cupcakes 2011 brings!
Read More

I was going to make this for Christmas day dessert but in the end I’d already made so much food that I decided it would be best to wait a few days to make it. I’m glad I did because we were able to enjoy it.

I’m not sure I would call this a traditional crumble. I’ve made a few in the past and the top always came out soggy. So I threw in what I thought were the best parts. The top made a nice sweet, crunchy crust. You could make substitutions and throw in your favorite nut or raisins instead.
Ingredients
For the base
300g shortcrust pastry
4 large Bramley apples
1/2 cup sugar
1/4 cup flour
1 tsp cinnamon
1/4 tsp nutmeg
pinch of salt
2 tbs butter
3 tbs toasted almonds
For the topping
6 tbs flour
1/2 cup brown sugar
1/2 cup dark chocolate chips (or raisins)
2 tbs ground almonds
2 tbs melted butter
1 tsp cinnamon (to sprinkle on top)
1. Preheat the oven to 424 F/ 220 C. Line a pie dish with the pastry and trim the edges. Peel, core and chop the apples.

2. In a large bowl mix the apples, sugar, flour, cinnamon, nutmeg, almonds and salt. Spoon the mixture into the pie shell.  Cut the 2 tablespoons of butter into cubes and scatter over top of the apples.

3. To make the crumble topping mix the brown sugar, flour, ground almonds, chocolate chips together in a small bowl. Pour the melted butter over top and gently mix together. Spoon over top of the apples. Sprinkle the cinnamon on top.

My sister got me a marshmallow cookbook for Christmas! I’ve been wanting to make some for ages and after she made a home made hot chocolate set with peppermint marshmallows to give for Secret Santa I wanted to make some even more!

To start with I made a batch of vanilla marshmallows and did half in regular icing sugar and half in rainbow sprinkles!

They were a little harder than I thought to make and at one point everything was very sticky!

They are worth the effort. They taste amazing. Fluffy and light and incredibly gooey when dropped in a cup of hot chocolate.

It’s important when making marshmallows to get everything ready before you start and to read the recipe through all the way so you know what you should be doing.
Vanilla Marshmallows
adapted from Marshmallows Homemade Gourmet Treats
Ingredients
For the Bloom
1/2  cup + 2 tbs cold water
1 1/2 tbs vanilla (I used vanilla bean paste)
3 tbs unflavored gelatin
For the Base
3/4 cup water
1 1/4 cup light corn syrup
pinch of salt
1 1/2 cups cane sugar (Tate & Lyle Granulated sugar is pure cane sugar)
1. Spray the bottom and sides of a 9×13 pan with a cooking spray and lightly wipe with a paper towel to leave a think layer of oil.

You can get corn syrup on Ocado
2. Make the bloom. In a measuring jug mix the cold water and vanilla. Place the gelatin in a small bowl and pour the water mixture in and whisk until there are no lumps. Set the bowl near the stove.

2. Make the base. Place the water, corn syrup, salt and sugar, in that order into a large pan. Bring the mixture to a boil over medium high heat. Place the lid on the pan and boil for 2 minutes.

5. The batter will be watery at first but as it beats will become thick white and glossy and increase in volume 2-3 times. Remove from the bowl and spread the marshmallow batter into the prepared pan. Smooth the top with a spatula. Let the pan set at room temperature uncovered for 4 hours minimum (best results is to let it set overnight).

Using a greased knife or pair of scissors cut into strips and then into cubes.

Dip into a bowl of rainbow sprinkles.

Store in an airtight container with layers separated with parchment paper. For best results only close the lid in 3 corners.

Posted by Cupcake Kelly on Dec 27, 2010 in Fruit, Holidays, Other Desserts | 4 comments

I made these for breakfast on Boxing Day. The apple cinnamon compote in the middle takes a little time but it is so worth it. Almost better than eating apple pie!

If you don’t have an Ebelskiver pan don’t worry. The filling for these would taste great on any kind of pancake or waffle. You could use it to jazz up some Ego’s too! We ran out of maple syrup so I had mine with vanilla ice cream!

Ebelskivers are Danish pancakes that were traditionally filled with jam and served at holidays or celebrations. The ones of today are versatile and filled with sweet or savory items.
Vanilla Pancake Batter
from Ebelskivers by Kevin Craft
Ingredients
1 cup plain flour
1 1/2 tsp sugar
1/2 tsp baking powder
1/4 tsp salt
2 eggs separated
1 cup milk
2 tbs melted butter
1/2 tsp vanilla
1. In a large bowl whisk together the flour, sugar, baking powder, and salt. Then stir in the egg yolks, milk, melted butter and vanilla with a wooden spoon. The batter will be lumpy.
2. In a small bowl whisk the egg whites until stiff. Fold in one third to lighten the batter and then fold in the rest.

2. Add the apples and cook, stirring often, until the apples are tender about 10 minutes. Remove from the heat and set aside.

3. Place the ebelskiver pan over medium heat. Brush each well with a little melted butter and place a tablespoon of batter in each.

4. Place a tablespoon of the filling in each well.

5. Place a tablespoon of batter on top of the filling.

6. After about 2 minutes using two wooden skewers flip the pancake over so the other side can cook. It will be a little liquid still but will fuse together when flipped.
7. Place in a warm oven until ready to serve. Dust with icing sugar.
Read More

I made some vanilla frosting and then split it evenly between two bowls and made one half red and added some peppermint extract. I added vanilla extract to the other half.
Brownie Cupcakes
adapted from Martha Stewart makes 15
Ingredients
1 1/2 cups plain flour
3/4 tsp baking powder
3/4 tsp salt
1/2 cup (1 stick) unsalted butter at room temperature
6 ounces dark chocolate
1 1/2 cups sugar
3 eggs
1/2 tbs vanilla
1. Pre-heat oven to 350 F/180 C. Line muffin tin with paper liners. In a small mixing bowl, whisk together the flour, baking powder and salt.
2. Heat butter and chocolate in a double boiler, stirring occasionally, until melted. Remove from heat, add sugar and whisk until smooth.

3. Add eggs, one at a time, beating until each is incorporated. Add the vanilla, and beat for 3 minutes. Reduce speed to low and add the two thirds of the flour and mix until incorporated. Fold in the last third by hand.

1. Cream the butter and criso together until smooth and fluffy. Add the icing sugar 1/2 cup at a time beating on medium high speed.

2. Place half the frosting in another bowl and mix in the red food coloring and the peppermint extract. Mix the vanilla extract into the other bowl.

3. In your piping bag scoop the vanilla part in once side and the red part on the other side and when piped should create a nice two toned swirl. Sprinkle pop rocks on for decoration.
Read More
Page 1 of 41234»